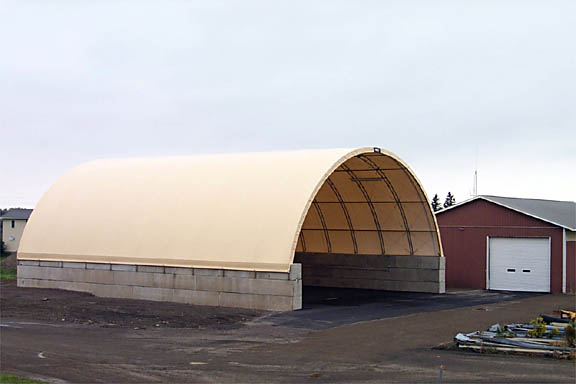 In past years the Township had to store its salt and antiskid materials outside, exposed to the environment. Even though tarps were used to prevent undesirable runoff, this was not an acceptable practice.

and additional financing from Community National Bank, the Township erected a 62 ft x 81 ft high-bay, three-sided storage facility.
Now materials will be under cover year around; protected from the environment; and will be free flowing, easy to load and use during winter months.

This building was constructed of large-format concrete blocks, 3 ft x 3 ft x 12 ft. Fifty-nine blocks were required to make the walls three tiers high. Some blocks are shorter to provide for staggering the joints. Each block has a recessed keyway on the bottom and a key on top to lock the blocks together. Franklin Township thanks PennDOT for the use of their forms to make these blocks.

The Township crew poured two blocks a day for six weeks this spring. After pouring, the blocks were stored on site until the crew erected them in August. The successful bidder for the concrete was Concrete Services Corp. of Fairview.

The previous materials storage site was cleared and prepared with a high quality subbase. The first tier of blocks was placed square and plumb and two layers of blocks were stacked on top.

Russell Standard Corporation from Franklin Township was contracted to place an asphalt floor and apron in the building.

Cover-All Corporation through Blair Construction Systems was the successful bidder for the installed tension membrane roof.

The completed value of the building is approximately $150,000.

Each day forms were cleaned and prepared by installing new hardware for that day’s pour.

Each 12-foot block has four lifting pins embedded to lift the 15,200 lbs. block. Coil ties between the form sides keep the form square. 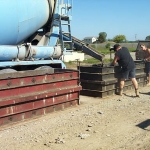 Concrete trucks discharge concrete directly into the two forms. It took about 30 minutes to pour the concrete. 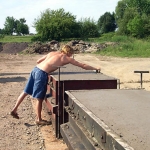 Each form is floated and finished. To clean and prepare two forms, pour concrete and clean up each day was a three hour job. 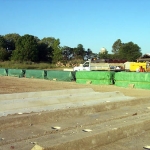 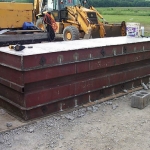 Green concrete blocks are uncovered the next morning and the forms stripped off. 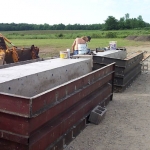 As soon as the forms come off, the concrete adhearing to the forms is cleaned off. The blocks are then recovered with a tarp to continue curing. 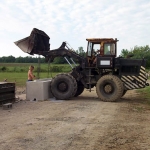 After three days, blocks are picked up with lifting pins and moved to the storage area. 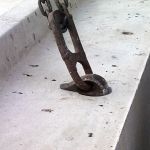 Four lifting points and a special lifting method provide for safe lifting and moving of the 15,200 lb. blocks. 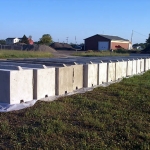 Blocks were placed in serial number order on site to await erection. 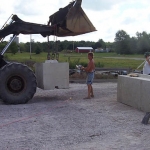 The subbase was prepared and precisely leveled to provide a footing for a plumb and square wall. Blocks were placed accurately using batter boards. 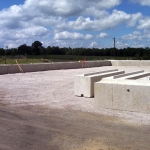 The first tier of the three-high block wall is done with the next blocks ready to be placed. 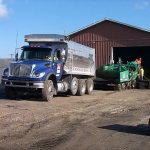 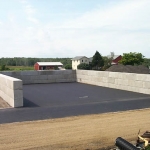 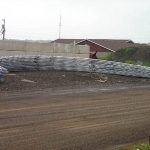 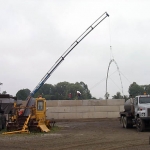 The first truss being raised in place. 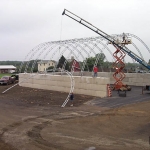 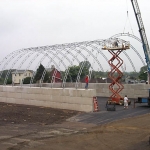 The last truss being set in place about two hours after the first.

Roof covering is raised by ropes and pullies late in the day to minimize wind interference. 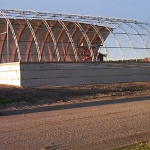 Covering is checked as it is being pulled up. 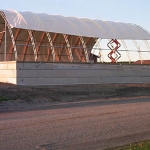 Any rope snags need to be freed. 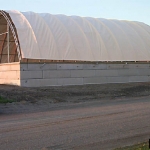 Covering needs to be temporarily held in place. 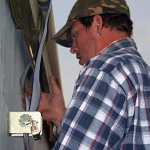 Straps that will hold the covering are temporily attached. Next, the crew will align the cover, lace the ends to the truss and tension the straps. 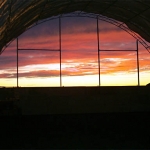