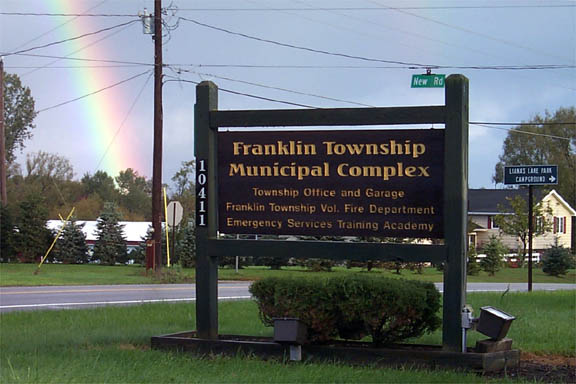 Franklin Township was established in 1844 out of portions of McKean, Washington and Elk Creek Townships. It was named Franklin after the patriot of the Revolution, Benjamin Franklin, at the suggestion of Honorable Judge John H. Walker. J.P. Silverthorn was the main person who circulated petitions and worked for its creation as a Township.

In 1844, the area that was being incorporated into the new municipality was thought to be five miles square, consisting of 16,896 acres. With modern surveying methods, Franklin Township was actually determined to be 5.22 miles from east to west and 5.52 miles north to south, consisting of 18441.8 acres.

A village was established and called Franklin Center, which was also the sole post office.

The remoteness of Franklin Township and its distance from the main lines of travel delayed settlement compared to other areas of Erie County. A few adventurous parties located on the Old State Road in the early 1800’s. Times were hard and discouraging, and they all relocated elsewhere.

The first permanent settler was L.D. Rouse who came from Connecticut in 1829. As late as 1835 the Township remained almost an unbroken forest.

It is interesting to note how many of the early settlers’ names remain with us today as road names in Franklin Township. During the period from 1832 through 1844, the following moved into Franklin Township: William and Levi Francis from New York; James P. and Levi Silverthorn from Girard; Henry and Levi Howard from Grafton, VT; Messrs. Goodban, Longley and John Tuckey from England; Thomas Spence and Thomas McLaughlin from Ireland; William Vorse from Chautauqua County, NY; Allen Mead from Saratoga County, NY; Ezra Milks and son Amos from Rennselaer County, NY; Curtis Cole and father from Unadilla, NY; Andrew Proudfit from York County, PA; Isaac Fry from Vermont; John Loyer, from Eastern PA; and John Gilbert from Somerset County, PA.

From these hardy soles and others who lived here, we have roads named: Francis, Fry, Silverthorn, Carbury, and Clair Wright.

The Township is high, rolling land with a few ravines and broken ridges which prevail in similar summit townships. The soil is clay loam with a few patches of gravel.

Some grain is raised, but the land is best suited to grazing and stock-raising, in which regard it is unsurpassed. Apples and some fruits yield handsomely. But little good timber remains and that is fast being cut off.

Land varies from $15 to $40 an acre. [Ed: Compare today’s prices of up to $5,500 an acre.] All the buildings are practically new, and there are several bank barns in the Township. 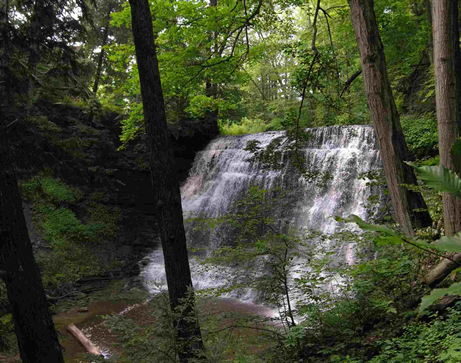 Falls Run is the most considerable in the Township. It starts about a mile east of a cranberry marsh southeast of Franklin Center and empties into Elk Creek in Fairview Township.

Below the cascade (now called Howard Falls) and Howard’s Quarry, the streamwinds between high, steep and romantic banks to its junction with Elk Creek.

There are no railroads in Franklin Township. The chief public thoroughfares are the Old State Road, the Population Road, on the line between Girard, Elk Creek and Franklin Townships (now Ivoray Road); the Crane Road; the Sterrettania Road, from that place to Cussewago, Crawford County (now Eureka Road); and the Quarry Road, from Franklin Center to Fairview (now Rt. 98 and Falls Road).

Franklin is without a grist mill and most grain is taken to Sterrettania to be ground. J.R. Steadman built a cheese factory at the Center in 1874. By 1884 it was owned and operated by F.T. Billings. In 1884 this factory consumed 3,170,000 pounds of milk producing 317,000 pounds of cheese and 21,120 pounds of butter annually. Six teams and eight men are employed.

In the southeast part of the Township, milk was taken to the Wellman factory on Crane Road about three-quarters of a mile inside Washington Township. Later there was another creamery at Silverthorn and Old State Roads. There was a cheese factory at Population Corners, Crane and Ivoray Roads.

There were three saw mills. The Mohawk was on Crane Road in the southwest built by D. Knight. It operated about 15 years. Sweet & Alden’s sawmill on Old State Road near the Washington Township line was built by J.P. Silverthorn, Daniel Munson and Charles Billings in 1854 and operated until 1882.

Lawrence’s Cooper Shop (makers of barrels and tubs) was operated on Harrison Road (now Silverthorn Road) in the southeast part of the Township.

Franklin Township was very thinly settled when the mandatory school law went into effect. Many years passed before the population was sufficient to divide the Township in to districts.

The first school house was built at Franklin Center about 1840. It was also used as the voting place in the Township as well as the town hall.

There were three joint schools: the Billings School on Fry Road about half way between Crane and Old State Roads on the west side, operated jointly with Washington Township; the Francis School on the northwest corner of Gudgeonville and Francis Roads, operated jointly with Girard Township; and the Elk Creek School, on the southwest corner of Crane Road at Ivoray Road.

The religious societies of the Methodist Episcopal and the German Lutheran erected a church at Franklin Center in 1869. The Union Church, as it was known, cost $1,500. It is now known as the Franklin Center United Methodist Church.

The Eureka Methodist Episcopal Church was organized in 1867 with 26 members. A church to house the congregation was built two years later at a cost of $1,800 on the southeast corner of Eureka Road and Crane Road.

The Elk Creek Regular Baptist Church was erected at the intersection of Population Road (now Ivoray Road) and Crane Road in 1868. The congregation was organized two years earlier with ten members and had grown to about 30 in 1884.

The closest Catholic Church was at Cussewago, Crawford County.

The Francis Church was also organized about 1870, just south of theintersection of Gudgeonville Road and Francis Road, actually in Girard Township.

There were scattered, private burial grounds around the Township. A cemetery remains today, the Francis Cemetery, about one half mile south of the intersection of Francis and Gudgeonville Roads.

The Center, the Stone Quarry

Franklin Center, or Franklin Corners, as it was called in the post office directory of the time, lies eight miles from Girard, Fairview and McKean, five miles from Sterrettania and 17 miles from Erie.

The village was founded by Oren G. Wood, who started a store and induced others to settle around him. John Tuckey, O.G. Wood and John Loyer were the original owners of the land.

In 1884, Franklin Center consisted of two stores, a church, schoolhouse, cheese factory, two blacksmith shops, a wagon shop, two shoe shops, about 15 houses and about 75 people. The village is the voting and meeting place of the Township.

In 1884 mail was received at the post office twice a week by gig (a light, two-wheeled carriage drawn by one horse) from Fairview.

So little building stone is found in Erie County that those areas having usable stone are to be envied. Only two other Townships, LeBoeuf and Waterford, had stone quarries.

The Howard Quarry, east of the intersection of Francis and Falls Roads, was in operation from the 1860’s until the early 1900’s.

Howard’s Quarry was favored with the distinction of providing the stone which was used to build the Erie County Courthouse.

Oil ran from the rocks at Howard’s Quarry and was gathered to be sold for medicine. Three wells were drilled with confidence that a large deposit would be found. However, only a small amount was found and the wells were abandoned.

Editor’s Note: Prior to 2003, the only historical information written about Franklin Township was in the 1884 and 1894 histories of Erie County. The adapted article from those sources can be found at the bottom of this page. But, just below you’ll find a wealth of newly recorded history of the Township compiled with the cooperation of our partners the Edinboro University of Pennsylvania and the Pennsylvania Historical and Museum Commission.